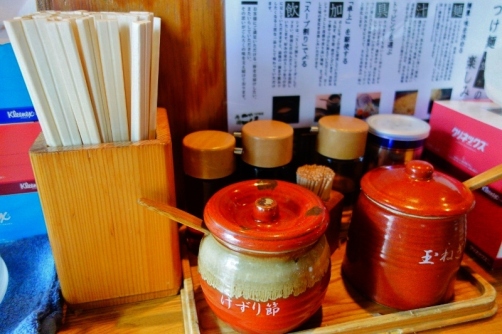 A typical set-up at a ramen noodle shop

The food awesomness continued from Korea into Japan.  Actually, it might be more accurate to describe it as: the food awesomeness only got better in Japan.

I don’t want to beat a dead horse, but Jason and I were really not ready for how amazing the food was going to be Korea after 3 months of South American food.  Little did we know, we were just warming up in Korea.  Our tastebuds were in for the greatest time of their lives in Japan.

We only spent four short days in Tokyo, so we had to make sure we were strategic in our food adventures.  Some of the things we had on our list was:

A ramen cook preparing to serve the noodles

Ramen is an cultural icon in Japan.  It’s also an art-form – traditional ramen chefs will argue that the perfect bowl of ramen noodle takes a lot of time and practice to achieve.  The noodles need to be al dente and the broth has to be perfectly seasoned, simmered, and reduced. Then it needs to be quickly slurped up, whilst making as much noise as possible.  That shows the cook that you’re really enjoying his ramen. 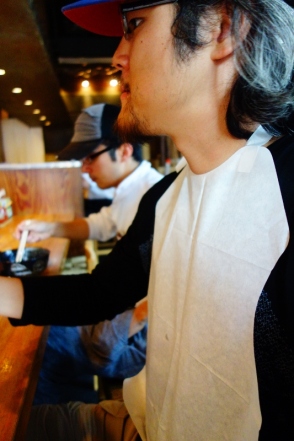 Jason sporting a restaurant-supplied bib. Ready for all the ramen slurping!

There’s a method of serving ramen in Tokyo that has been around for 50+ years but has only recently become hugely popular.  I don’t think it’s really caught on in Toronto as I’ve never seen anyone order it (or perhaps I just haven’t been looking out for it).  I first saw it on a TV cooking show – a specific episode featuring ramen in Japan.

Tsukemen with sesame-based broth. One of my favourite ramen meals

Known as tsukemen, it’s basically ramen that you dip into broth (as opposed to being served in broth).  First, you choose the type of broth you want.  If you’re lucky, the vending machine will have pictures

If you’re unlucky, then you have to stare at the machine with a glazed-over expression, until the cook notices and comes over to help you out. 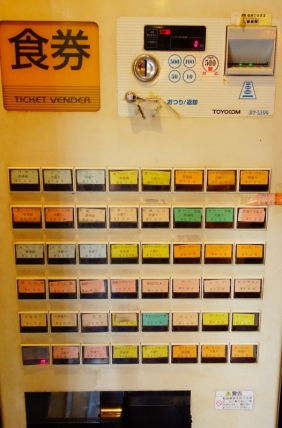 Then you choose the portion of noodle you want. The sizes will range from a small portion to sometimes, an extra-large portion. 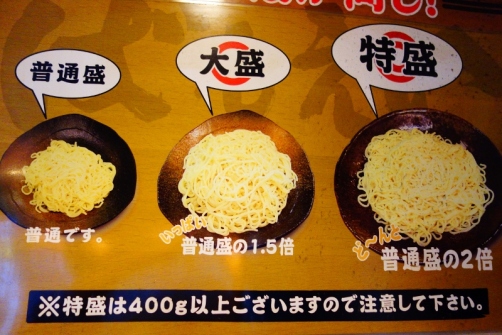 Ramen noodle portions. I ordered the medium the first time and it wasn’t enough 😦

They’re all the same price, so it’s tempting to order the largest portion.  But waste would be frowned upon, so choose wisely.  I made the mistake of ordering too small a portion the first time (It was a medium!) and ended up digging into Jason’s ramen stash.  The next time, I ordered much too large of a portion (XL) and had to waddle uncomfortably out of the ramen shop.  I know, first-world problems. 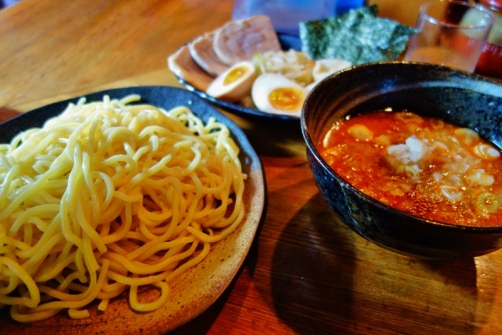 Tsukemen with all the fixings (and an XL noodle portion!)

I think it’s the perfect way to eat ramen.  The ramen noodles don’t go mushy from sitting in broth.  The broth is thicker (almost like a thin sauce) and much more flavourful.  The noodles are the perfect combination of thick and chewy – an ideal vehicle for the thicker broth.  As you dip the noodle in the broth, the thick broth coats each noodle in its entirety.  Simply perfect.  Once you’ve had it, you might find it difficult to go back to conventional ramen.

Sometimes overlooked by noodle-lovers vying for the hugely popular ramen, this simple and delicious noodle dish deserves a cult following too.  Soba can be served in a hot broth, as pictured above.  Or served on the side for dipping into a hot broth (looks like someone is learning a thing or two from ramen)

Or for the indecisive, you can have soba AND a deep-fried oyster fritter over rice.

But my personal favourite is zaru soba, where the soba noodles are served chilled with a dipping sauce.  The dipping sauce is called soba tsuyu, in which you should mix scallions and wasabi.  It’s especially refreshing during the hot summer months.

Okay, izakaya isn’t a type of food.  But it IS a type of food experience.  Best described as a Japanese pub, these little establishments serves chilled beer, sake, and (my favourite part) delightful little dishes of food (similar to tapas).

An izakaya in Ebisu district

They’re hugely popular with Japanese businessmen who, after a long day at work, aren’t ready to head back home yet.  The izakaya scene has also become quite popular in Toronto, but sadly, it doesn’t hold a candle to the izakaya experience in Tokyo.

We made out way to Ebisu district – known for its dense population of izakayas – and popped our head through random doorways until we discovered this little locals-only joint. 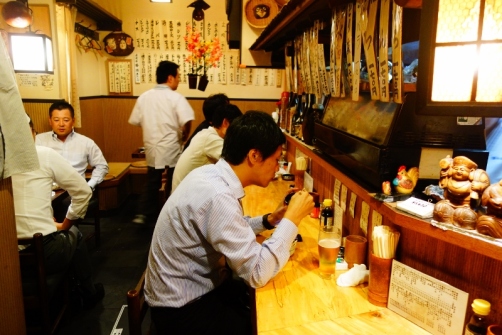 Locals in an izakaya in the Ebisu district

No English menus out front and no English writing on the walls – it obviously didn’t cater to tourists.  Yes! Our favourite type of spot.  We managed to score the last available table tucked away near the back and tried to figure out what the locals were ordering.  Luckily, the server handed us a small hand-written English menu after it became clear we didn’t know what we were doing.

An unknown meat skewer that was delicious! 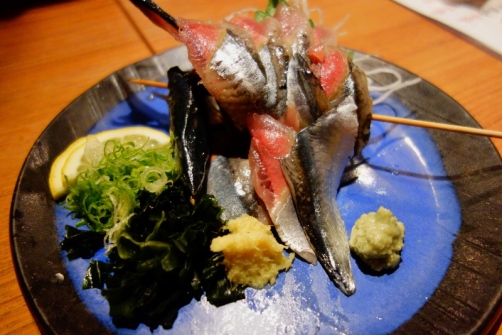 After polishing off the sake and food, we discovered that we were still hungry, so we settled up and headed out to find another izakaya.  By now, it was a little later in the evening, so normally reserved and polite businessmen had started to take to the streets with song and dance.  It made for pretty good local entertainment.

Ordering and pouring sake by the glass

We decided to order sake by the glass this time, and I learned about this very cool custom.  When ordered by the glass, sake is poured by the server into a large sake glass that’s placed into a small wooden container.  To show that the establishment is generous with their liquor, the server pours the sake until it overflows the glass and fills the wooden container as well.  As you slowly finish the sake in your glass, you pour the overflow sake from the container into your glass.

There are few things more magical than sushi that arrives via conveyer belt.  Okay, that’s probably an exaggeration.  But conveyer belt (or kaiten) sushi restaurants ARE a very happy place.  There’s no waiting for the server to come over with a menu, or waiting for the chef to prepare your meal – you just grab whatever you fancy off the moving belt.

We sat right by the chefs station

Or if you’re sushi connoisseurs like us (ha!) and nothing on the conveyer belt does it for you, you can yell out for the sushi chef to make you something à la carte.

Jeanne found us a great little kaiten sushi place called Pintokana in Roppongi district. It was our first night in Tokyo and we went a little crazy…good crazy. I don’t have that many pictures of the sushi we ate because my hands were busy stuffing sushi in my face.

Uni (sea urchin) sushi. One of my faves!

Chirashizushi is a bowl of rice topped with a variety of sashimi and additional garnishes.  The four of us had chirashizushi for breakfast the morning we had hoped to visit the Tsukiji fish market.  It was closed but this more than made up for that disappointment.

Jason’s breakfast: Roasted eel over a bed of rice 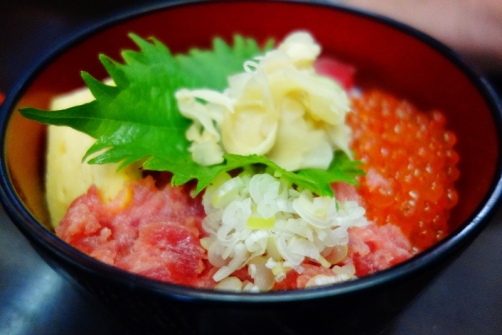 And yes, that IS what you think it is – a huge helping of fresh uni (sea urchin) in my breakfast bowl 🙂  This dish probably topped everything else I had eaten in Tokyo.  I think I moaned in ecstasy after every single bite (much to the annoyance of everyone else at the table) 😛  Seriously AH-MAZ-ING.

This little piece of perfection is called tamagoyaki.  It’s a type of grilled egg that’s slightly sweet and savoury.  Sprinkle a few drops of soy sauce on it to bring out the flavour.  The version pictured below is probably the best I’ve ever tasted.  Fluffy, tasty and hot off the grill.

The best version of tamagoyaki I’ve ever had. It was melt in your mouth.

The Japanese are constantly on the go.  So it’s not surprise to see that a lot of their food is designed to be mobile.  Onigiri (rice balls) are small but filling and designed so that you can eat them neatly with one hand.  They’re available everywhere in Tokyo (e.g. convenience stores, food stalls, vending machines).

I LOVED onigiri (rice ball). Every chance I got, I would pick one up. (which is pretty easy to do when they’re available everywhere)

Of course I have to end off my post on food in Tokyo with a classic.

I hate to admit it but sushi in Japan really IS better – the fish is fresher and of better quality, there’s more variety, and the fish to rice ratio is perfect.  Our last night in Tokyo was spent gorging on excellent sushi.

And there you have it – Japan takes the win!  Hands down, Japan has offered us the best food experience in our travels so far.  Let’s see what Southeast Asia will bring to the (dining) table.