The more eclectic the decor on the bus, the faster and crazier the driving. 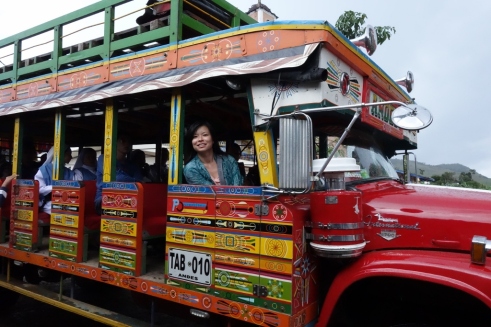 The bus ride from Jerico to Andes was one of the most interesting bus rides we’ve taken so far. Unfortunately, the one from Cartagena to Medellin was the exact opposite

Getting to the main bus terminal in Cartagena took a 40 min cab ride (which surprisingly only cost CDN $11). Once we arrived, we found out the next available bus would require us to wait another 3 hours in the sweltering bus terminal. We couldn’t afford to leave Cartagena that late since the estimated 13 hour bus ride would mean we would arrive in Medellin somewhere around 3am. We had read warnings to only arrive in Medellin during the day.  Note: Although this warning was directed specifically to people flying into Medellin (i.e. to avoid the stretch of highway between the airport and the city at night), we decided that it might be wise to apply this to our bus travels as well.

After a game of Colombian Charades (i.e. Charades with Colombian locals) with a few random men hanging around a couple of passenger vans, we were able to negotiate a ride to Medellin that would leave immediately.

Part II: Sardines in a van

12 people crammed into a van that is supposed to seat 8. This part lasted 6 hours.

Squished into the 2 front seats were 3 people. Squished behind me in the 3 back seats were 5 people. 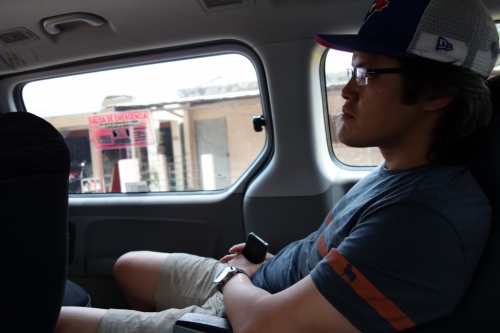 Jason and I were lucky enough to get our own seats!

Our bus driver stopped at a bus station in some unknown town. Everyone got off the van and got into another van.  A Colombian fellow took our bags and loaded them into the van too. Just before we took off, Jason asked “á Medellin?” The driver looked at us as if we had both grown an extra head.  Then a stream of Spanish words came out of his mouth, of which none were ‘Medellin‘.  He waved us off the van, while a Colombian boy unloaded our backpacks.  He then put them both on (one on his back, the other on his front) and walked off around a corner.  We scurried after him and when we caught up to him, he was loading our backpacks onto an entirely different bus.  “Medellin?“, we asked one of the random men standing around the bus. “Si.”, one them replied.  So we hopped onto the slightly bigger, more run-down, dark and dank bus and hoped the guy outside knew what he was talking about.

Another 5 hours later, we arrived at a bus station in another unknown town.  We got off the dark, dank bus because everyone else did.  This time, our bags got moved into one of those fancy coach buses.  The conductor started drawing up new tickets for us, and I thought we’d have to pay again for the next leg of the epic saga titled “The never-ending bus ride”.  Luckily, there was an English-speaking Colombian man in the mix.  We’ve discovered on this trip that finding someone who speaks English in Colombia is like receiving good customer service from Rogers Cable…a rare and pleasant surprise!  He told us that this was the last bus transfer and that we should be arriving in Medellin around midnight. 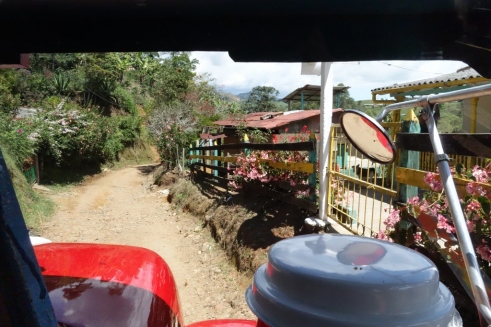 On this bus ride, we spent 3 hours travelling on a dirt road. We probably could’ve walked it faster 🙂

I can’t really title this part, “Part V”, since we were still on the same bus.  But around 11pm, we came to a sudden stop on a winding mountain road.  At first I thought we were having engine trouble or maybe a flat tire.  The bus driver adjusted the bus a bit and then turned the engine off.  We were plunged into darkness and silence.  No one was panicking so I didn’t think we were in trouble.  Everyone else on the bus just sat back and went back to sleep.

After sitting in the dark for 15 minutes, I asked Jason to find out what was going on.  The English-speaking Colombian was not with us, so we tried to patch together whatever Spanish we understood and figured out that we were going to sit here until the road construction up ahead was finished(?!!)  We were flabbergasted!  We had to wait here for at least another hour until the construction crew finished building, apparently, the only road between here and Medellin.

And sat some more.

When we finally got started again, and drove over the newly-formed “road”, we gaped at the line-up of cars, trucks, and buses on the oncoming side of traffic.  Colombian efficiency at its best, I tell ya.   Who schedules construction on the only road in the area when there’s obviously still plenty of traffic?  We finally rolled into Medellin at 2 in the morning.

Ten minutes later, the bus that left Cartagena 3 hours after we left also rolled in.