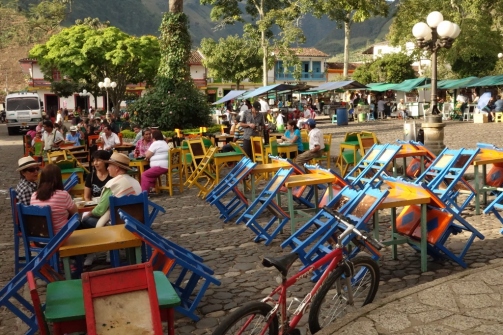 After we got off the crazy bus (and just so we’re clear, I’m referring to the crazy-colourful bus and its crazy driver..not the passengers), we arrived at the closest thing to paradise on Earth. 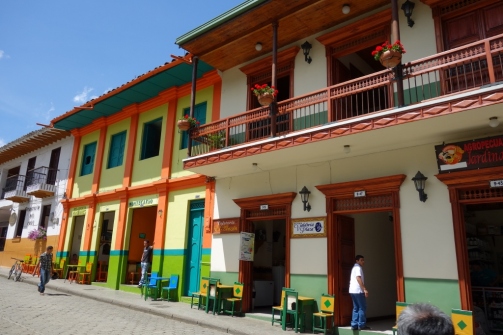 We had arrived at our next pueblo: Jardin. It was rumoured that the earliest discoverers of this village stumbled across it and, amazed by its natural beautfy, called it a garden. And I can see why – its literally a modern-day Garden of Eden. Mountain vistas, lush green valleys, and crystal clear mountain rivers from all angles. 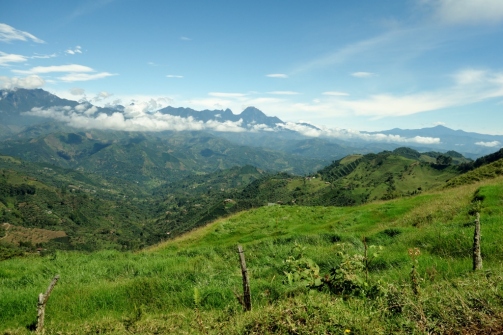 As was with Jericó, neither Lonely Planet or Rough Guides makes any mention of the pueblo, so foreign tourists rarely visit. 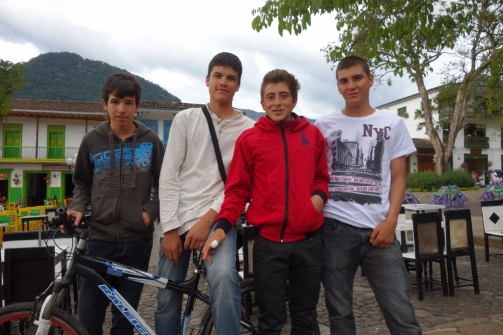 Jason and I were mild celebrities in Jardin. These kids came up to us and asked if they can take pictures with us. We happily obliged. They didn’t ask for our signatures though.

This perfect combination of breathtaking natural beauty, mild climate, and ‘not-a-single-souvenir-shop-in-sight’ makes this village an ideal place to stay for a couple of nights.

Sunset over the central plaza

Jason and I took a quick ride out of the village centre on one of the (what locals affectionally call) “motoratones” or motor-rats, because they resemble little rats on wheels. 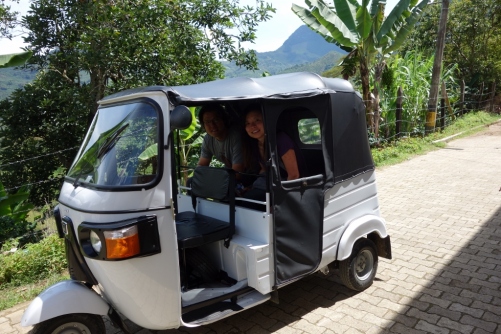 One of several motoratones in the village

We arrived at ‘La Trucheria’ or the trout farm which I thought was going to be kinda cheesy. I was totally proven wrong when we discovered we got to fish for our own trout!

That is one proud man!

I technically caught a trout first but I screamed so loudly in excitement that I think I scared the fish off the hook and onto the ground, where he flopped around for a few frantic seconds before gratefully escaping back into the pond. 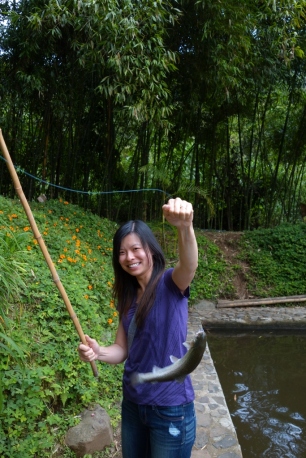 I caught one too (before Jason did!) 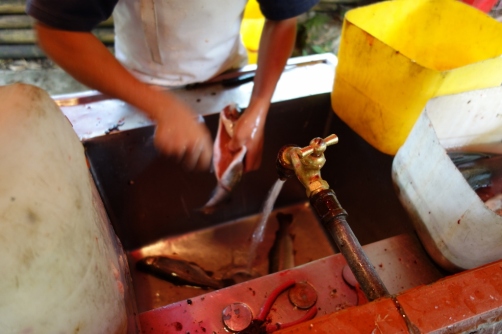 We got the fish cleaned right there, and afterwards, brought the fish to the restaurant on site for them to prepare the freshest, tastiest trout I’ve ever had!

Me holding up our bounty!

The mouthwatering trout we had for lunch. This was only half of it, since we caught 4 trout.

One of the top hiking destinations nearby was to ‘La Cueva del Esplendor’ (Cave of Splendour). There are number of ways to get to the destination: hike, horseback ride, rappel down the waterfalls. We booked our horseback ride to the cave through a local guide, Jaime (pronounced HY-mee). (Ask around town for him – there appeared to be only 2 main guides who offer this tour.) I was excited to try my hand at horseback riding again…my last experience was pretty scary and I got eaten alive by mosquitoes so I didn’t really enjoy it that much.

At our guide’s finca

We arrived at Jaime’s finca (or coffee farm) and he paired us up with our horses. I got paired up with a handsome white horse named Leonardo. He turned out to be the sweetest horse – responsive and wouldn’t go faster than a trot unless I directed him to.

Me looking like I’ve been riding all my life (not!)

The trail we took was a different story…it was slippery, muddy, steep, and at times incredibly narrow. I have a new-found respect for horses. I thought the slippery trail was going to do my horse (and as a result, me) in, but Leonardo was so sure-footed. He never let me down (well, not until we reached end of the ride).

Jason on his steed

The actual views we took in during the horseback ride was breathtaking (or perhaps it was the altitude?). The views of the endless Andean mountain range were spectacular. Pictures do not do them any justice whatsoever.

When we reached the end of the trail at another finca, we tied up our horses and took a pretty difficult trail through the dense foliage to get to the waterfall. The trail by foot was equally slippery and muddy, and we found ourselves having to hang onto nearby vines and branches for dear life. An older American lady that was with us had to be lead down personally by our guide. Jaime was great – really patient and wanted to make sure the entire group was always safe. 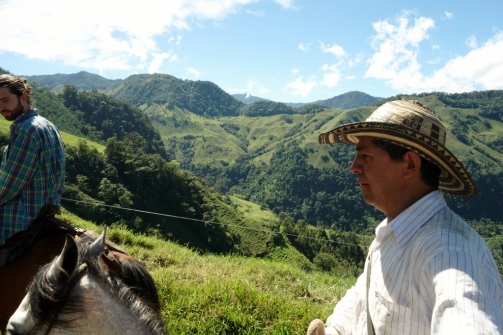 But all the work was worth it. The sight that greeted us was breathtaking – seriously our group took in a collective gasp. Like a ray of light, the waterfall rushed down through a hole in the roof of the cave, sending up misty droplets into the air.

The cave of splendour

Jason was the only one brave enough to face the icy cold water and he took a quick dip under the falls. Crazy, this guy! 🙂

Jason swimming in the waterfall

Jason and I in front of La Cueva del Esplendor

Instead of taking the same muddy trail back up to the second finca, a small group of us (the two of us and a young American couple who were spending a few months in Central America and Colombia) were allowed to walk up a section of waterfall. Pretty cool and, at times, a little scary as we jumped from rock to rock in our borrowed galoshes.

Climbing up the waterfall

We met up with the guide and the older American couple at the second finca and remounted our horses for another beautiful ride back through the mountains. This time, Leonardo decided to be a bit more daring and would often walk right on the edge of the trail, so there was nothing but a steep drop on one side of us. He lost his footing briefly at one point, and I nearly peed my pants! After that, I led him away from the ledge.

Riding through the Andean mountains

We had a wonderful lunch of chicken, yuca, potato, rice, cornbread – all wrapped up within banana leaves when we returned to Jaime’s finca. Sooo good!

Jardin has definitely been one of the highlights of our trip so far. Make sure to stop in for a few days if you’re ever in Colombia.