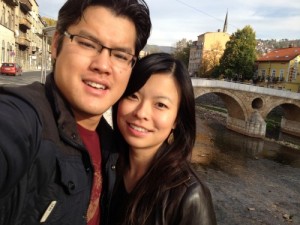 We are Jenn and Jason, a newly(ish) married couple from Toronto, Canada.  I had always dreamed of traveling the world for a year.  Shortly after Jason and I started dating, I told him about this dream of mine.  Chalk it up to the fact that we had just started dating, but Jason (romantically) declared that he’d follow me around the world if I wanted to go.  Fast forward a couple of years and shortly after we got married, we decided to make that dream a reality.  And so began our plan to press pause on real life so we can live out that dream of wandering the globe with little more planned than a one-way flight out of the country to Colombia, South America.